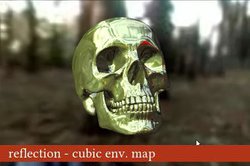 Hello, just a quick hack report cause I really liked how useful it turned out to be.

It all started when I located a small program I wrote, for an interesting coursework assignment, back when I did my graphics MSc at the University of Hull. I wanted to upload a video capture to youtube to show 4rknova who’s going through the same MSc course right now.

So I did capture the video, and saved it as an image sequence for further editing, because I wanted to add titles at the bottom describing what was demonstrated at each part of the video (the program was basically a sequence of arbitrary shader effects).

But how was I supposed to add the captions? The thought of wrestling with one of those fucking GUI video editing programs made me cringe. They are all slughish, heavy and unweildy, and I always have to fight for a few hours to do even simple things. I was more inclined to use ffmpeg from the command line, but then adding transitions to the captions, like having them fade and slide in from below would be a complete pain in the ass. Btw take a look at the final video to understand what I was trying to achieve with the caption transitions. Should be really simple right?

But then it dawned … hey, I could easily write that transition in a couple lines of C/OpenGL code instead of fighting with all those video editing programs! I started by writing a simple program that iterates over an input image sequence, opening each one in turn and then feeding them one by one to a dlopened plugin which could do whatever it likes with the frame. When that plugin processing function returns, I just dump the image back to the disk. It’s that simple!

Then the plugin was almost trivial as well. I just drop the frame into the OpenGL framebuffer and use my new text rendering library to draw the captions at the appropriate times with the appropriate alpha and position. The timing was derived by a simple event script file containing the frame numbers where each part starts and ends. I fed the script into my new event sequencing (demosystem) library which gives me back a nice linearly increasing [0, 1] value for each event (part) during the time when it is active according to the script. That makes it a piece of cake to fiddle with trig and some factors here and there to transition my captions just the way I wanted.

Here’s the code in case you want to play around with it:

I’m impressed, it’s fucking awesome and powerful to edit videos like that, and I’m definitely going to use it again.